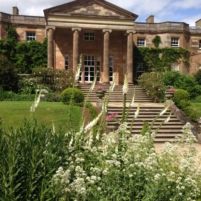 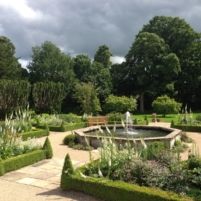 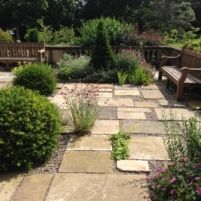 In 2014 Catherine was appointed to lead a new programme of re-vitalisation planned for the gardens of Hillsborough Castle in Co. Down Northern Ireland. Hillsborough, near Belfast, is the seat of the Secretary of State and the Queen’s residence in Northern Ireland. It had recently been taken over by the charity, HRP, (Historic Royal Palaces), who were beginning work on opening up the 100 acre estate to the public – with plans to gradually restore and re-design the grounds, including the walled garden.

Collaborating once again with Mark Lutyens, they began by producing a master document of ideas for the restoration and development of the different areas: the terraces around the house, the iconic Yew Walk leading down to Lady Alice’s Temple, the Lime Avenue, the pleasure grounds, the lake and its surrounding walks, the ‘Lost Garden’ along the river, the four acre walled garden and front courtyard.

With help from the home team of gardeners they have completed works to the South Terrace, (sweeping away the wall to wall gravel and replacing it with mellow re-claimed stone which they softened with planting) the Jubilee Parterre, (a softer approach with a fountain and white colour theme), the Dining Room Terrace and the Yew Walk. This exciting project continues.