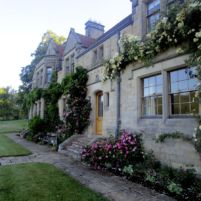 Catherine gave advice on the re-thinking of several areas in this fascinating garden, made famous by distinguished horticulturalist Rosanna James, when the next generation took on the house. She worked on the terraced slope, which leads down to a pond, and an area of shrubbery on a bank framing a key view down the dale. The shrubbery was removed and the bank graded and seeded with grass and planted with pheasant eye Narcissi and Camassia for a more natural look to blend with the wider landscape.

The planting scheme on the terraces was simplified to fewer elements – pared back to just several core plants –using the yellow primula around the pond as a starting point. The complimentary acid yellow flowers of alchemilla and the ferns were increased, Iris sibirica planted for early interest, white foxgloves encouraged to self seed and hummocks of Hebe rakaiensis added for structural shapes.

Elsewhere a hazel walk was created and more cherries and crab apples were planted in the orchard and surrounding meadows whilst the border against the house was widened to allow the stone façade to emerge from a greener softer base.